Noh theatre is one of the representative forms of Japanese performing arts. It is the first art to have been recognized by UNESCO as Intangible Cultural Heritage of Humanity.

Noh is composed of theatre, dance, and music (chant and instrumental music). Instrumental music is performed by an ensemble of musicians called hayashi. There are four instruments in the hayashi ensemble: a flute, a shoulder drum, a hip drum, and a stick drum. Together they are also called shibyoshi. Each musician specializes exclusively in one instrument and performs according to traditional conventions.

The noh flute (fue) is made from smoked bamboo. Between the mouthpiece and the finger holes a narrow wooden piece (nodo) is inserted, creating the noh flute’s uniquely piercing sound. The type melody the noh flute can produce is different from that of Western music, inviting the listener to a dimension of mysterious elegance. 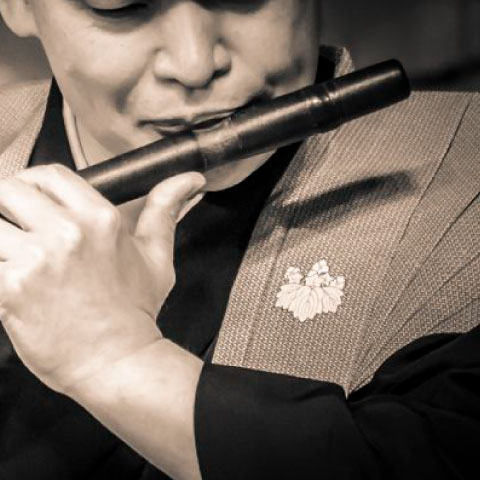 The body of the shoulder drum (kotsuzumi) is made from cherry wood, while horsehide is used for the front and back drumheads. These three parts are kept together by a hempen cord. By pulling the cords the drummer tightens the drumheads, thus producing different pitches. While performing, the drummer wets pieces of paper attached to the back drumhead or breathes onto it to maintain the desired humidity. The mellow tone of the shoulder drum has become one of the iconic sounds of traditional Japanese music 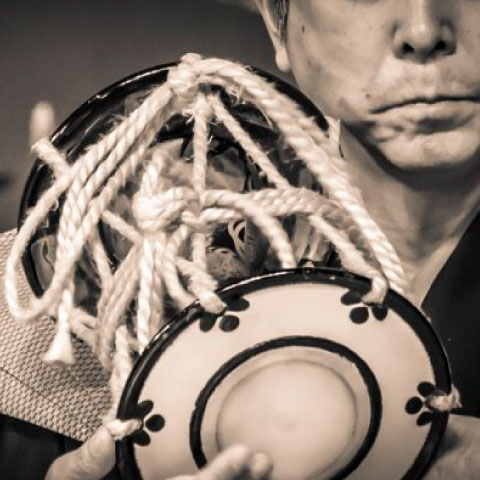 The hip drum (otsuzumi) is made from the same materials as the shoulder drum. However, this percussion requires to be dry. Before the performance the drumheads are placed to dry in front of a charcoal brazier, and then tightly stretched onto the body with cords. The result is a sharp and high-pitched sound. The drummer wears a protecting cover on the right hand in order to hit the hard surface of the drum with sufficient strength without hurting him or herself. The sound of the hip drum is overwhelmingly powerful. 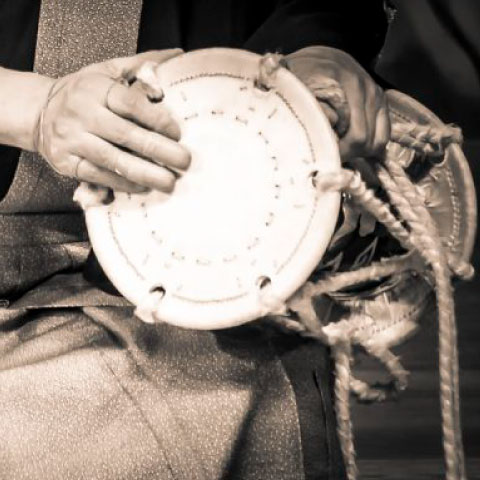 The body of the stick drum (taiko) is made from zelkova wood, while the drumheads are made from cowhide. The drumheads are attached to the body with a hempen rope, and the drum is placed on a low wooden stand. The taiko drum is played with two thick sticks. Unlike the other two nō drums, the stick drum only appears in some plays, usually toward the end, when the play reaches its climax. The rhythmical and dynamic patterns played by the stick drum make its performance particularly exciting. 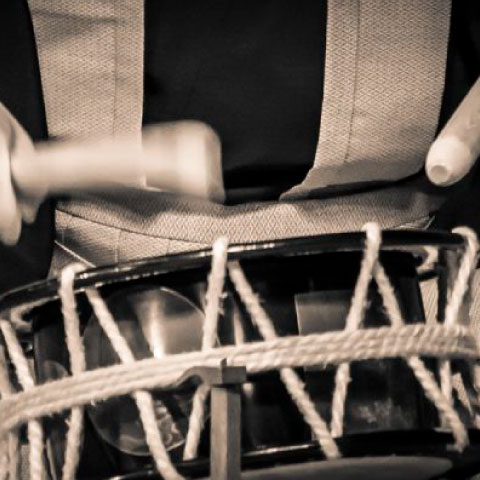